In the last forty years some 4 billion people, who had been living in developing and agrarian-led countries, have abandoned their traditional way of life, moving toward a larger and more global division of labor. This transformation is happening much faster than the one that supported the West two hundred years ago -- and transforming the lives of many more people. Britain supported just 8 million people when it began its 250-year progression from the farm to the laptop computer. Mexico is making that same journey in only four decades -- with a population of more than 120 million.

Global economic output from Central and South America is exploding, catalyzed by a growing and vibrant labor pool, political overhauls that support business and investment, and a culture of entrepreneurs that values the dignity of work. Below is a graph of a snapshot of the World’s Gross Domestic Product broken out by the major regions of the world, which shows the increasing influence of Latin America & the Caribbean. 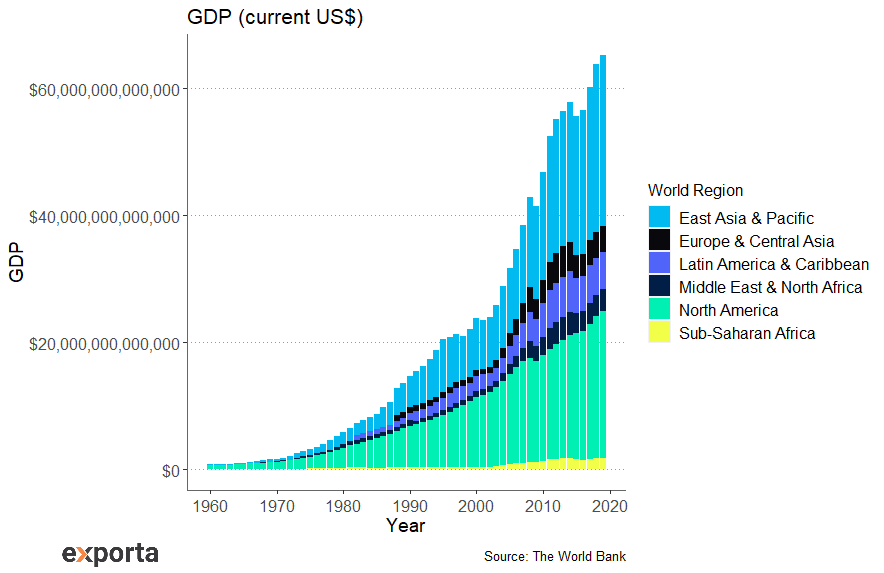 Latin America as the new central hub for near-shore manufacturing

Historically, when a U.S. business decides to manufacture outside of the United States, China has long been the default answer for many companies. The practice of offshoring manufacturing to the Eastern Hemisphere was enabled by cost and labor-pool advantages. However, with increased tariffs from hostile trade negotiations, rising labor rates and lengthy transit times, the relative advantages that once sustained China for decades are eroding at an increasingly fast rate. The evidence of this irreversible trend is clear as demonstrated by the many U.S. firms that are nearshoring their manufacturing operating capacity to Central and South America -- and for good reason. This article will discuss the three primary drivers for increasing Latin American competitiveness in manufacturing.

By prioritizing the growth of manufacturing at the government level through initiatives such as the Caribbean Basin Initiative (CBI) and the Dominican Republic-Central America-United States Free Trade Agreement (CAFTA-DR), Latin American export markets have been unlocked through greater access to free trade and more diversified global supply chains. With these historical pain points removed, Latin America is well positioned to utilize its proximity to the U.S., demographic advantages, and duty-free arrangements to alleviate the ongoing supply chain disruptions and labor shortages that have riddled American businesses in recent years.

Latin America’s workforce is young, highly educated and backed by stable economies. The chart below highlights the growing share of 15-64 year olds in Latin American countries. 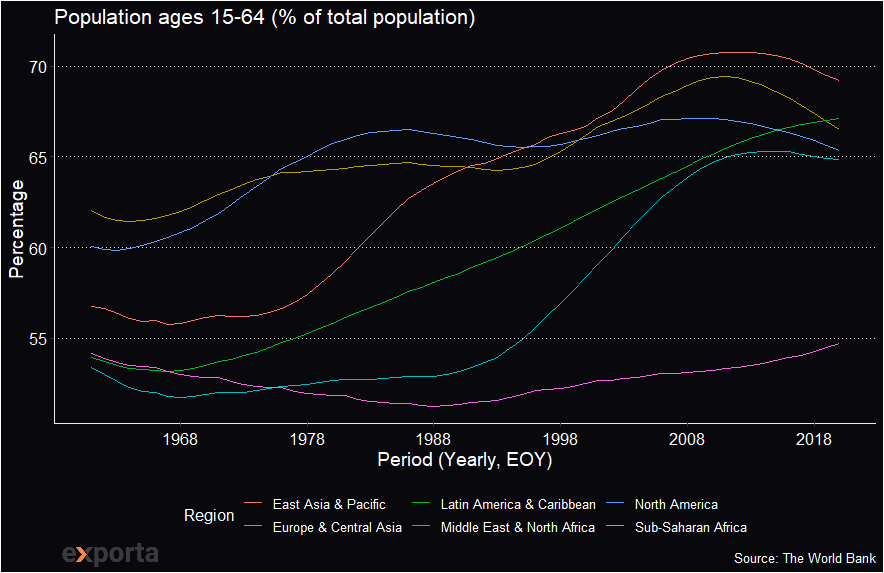 While most developed regions are projected to see their dependency ratios skyrocket in future years (and therefore their respective share of 15-64 year olds shrink), Latin America continues to experience the opposite phenomenon. This is an encouraging sign as GDP and Exports growth need to be supported by labor and capital.

Similarly, along with a vibrant labor pool, the Latin American workforce is highly educated, with the quality of their education among the best in the world. The graph below shows Latin America as a leader, along with North America and Europe, in terms of Secondary Education school enrollment. 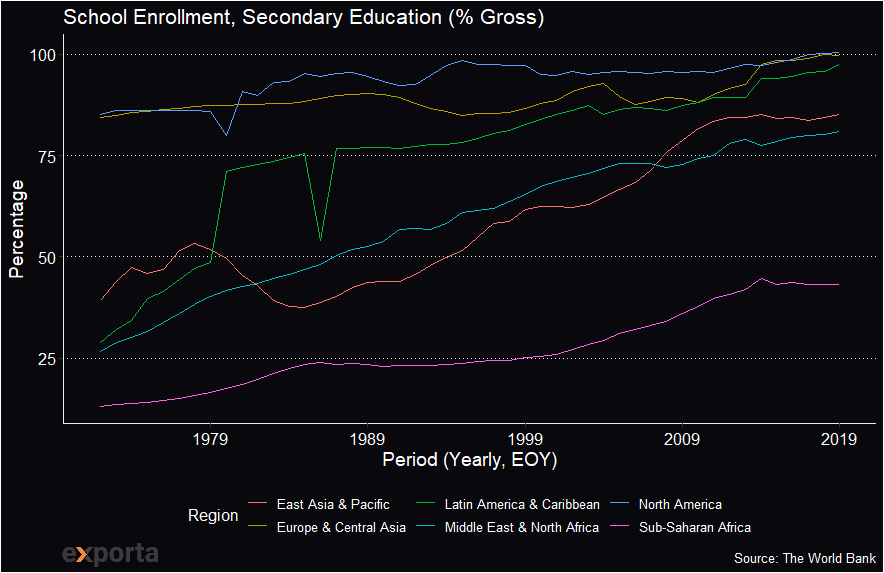 Latin America has made major gains over other developed regions of the world in terms of its skilled and young workforce, which will continue to translate in terms of its share of global economic and manufacturing output.

Proximity joins free trade and labor pool advantages in terms of the benefits of Latin American manufacturing to U.S. businesses. The challenges of global shipping have improved universally over the preceding decades, however, there are still some clear advantages to nearshore manufacturing over offshore manufacturing that will always persist due to its unique geography. For example, according to the World Bank, the time to export for documentary compliance has significantly decreased in Latin America over the last 5 years (40% faster), compared to the more marginal gains in speed efficiency for East Asia and the Pacific (9% faster). 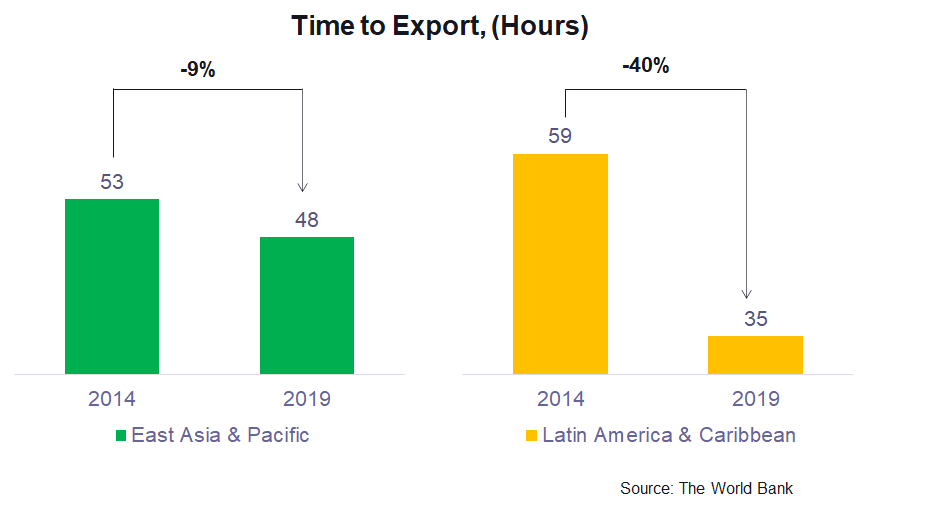 Similarly, Latin America boasts a language and time-zone advantage over its offshore competitors. Ease of communication can make significant differences in the globally competitive manufacturing industry, as English is already the second language for people in Latin American and operating in Central Standard Time means it is easier for businesses to stay on top of communications, emails and conference calls.

Though China is still a competitor in terms of price, new tariffs and sky-high minimum quantity requirements are making it increasingly difficult for U.S. businesses to remain competitive without increasing their prices to customers. The combination of more expensive labor and freight rates for offshore manufacturing has enabled Latin American manufacturing to become a viable alternative for supply chain diversification. According to the World Bank, Latin American has made large gains over its East Asian rivals in terms of cost to export over the past five years. 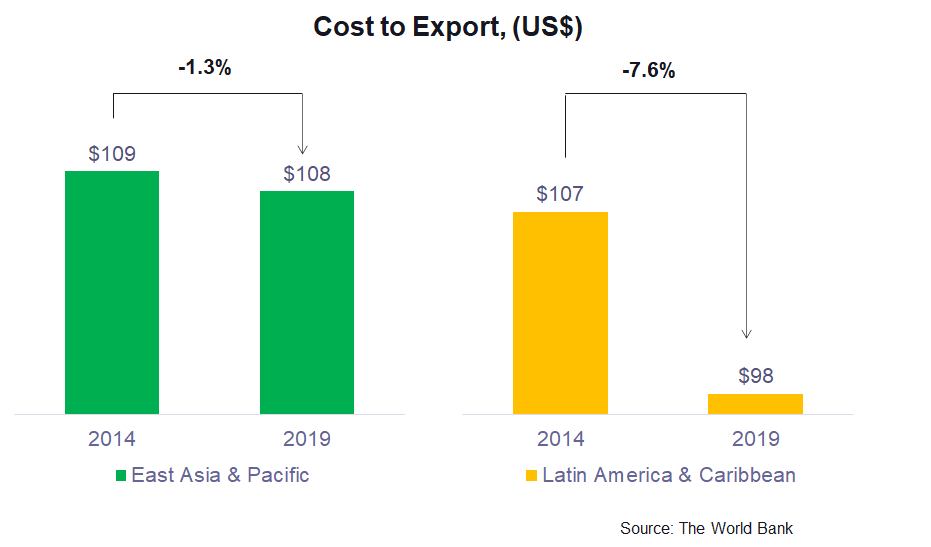 Many challenges still lay ahead for Latin America to become the global leader in manufacturing. However, the critical foundations are in place to support a long-term, productive manufacturing sector that is more resilient for U.S. businesses than China. Governments and businesses are working together to link supply chains and diversify export markets through investment in infrastructure and education.

As you’re searching for the perfect manufacturer to partner with, it’s important to strategically evaluate each element of production which includes more than simply cost of parts and labor. At Exporta, we believe the people of Latin America know how to seize opportunities by managing available resources, including their own labor, relatively efficiently. Using our combination of technology and e-commerce expertise, we believe we will be able to tap the vast entrepreneurial reserves that are developing throughout the region. Latin America emerges as a key player in the Wholesale Market

PRICE VS QUALITY- Do I have to choose?